Cookies are a set of data stored on a user’s device when the user browses a web site. The data is in a file containing an ID number, the name of the server which deposited it and, in some cases, an expiry date. We use cookies to record information about your visit, language of preference, and other parameters on the site in order to optimise your next visit and make the site even more useful to you.

To improve your experience, we use cookies to store certain browsing information and provide secure navigation, and to collect statistics with a view to improve the site’s features. For a complete list of the cookies we use, download “Ghostery”, a free plug-in for browsers which can detect, and, in some cases, block cookies.

You can also visit the CNIL web site for instructions on how to configure your browser to manage cookie storage on your device.

It is also possible to block certain third-party cookies directly via publishers:

The following types of cookies may be used on our websites:

From the deep past to the Anthropocene: coupling Earth system function to climatic change

Please find below a list of hotels located in the heart of the city centre at least 35 minutes from the symposium venue :

Transport to Bordeaux and Venue

Bordeaux is located in SW France and can be easily reached by air, rail and road.

Bordeaux is connected by a number of international airlines with routes to many of the major cities in Europe and over 20 flights between Bordeaux and Paris each day. There are several low cost airlines that fly in to Bordeaux (Easyjet, Ryanair, Vueling...), as well as chartered flights from international destinations during the summer months.

Public transportation between the airport and the city centre can be cheap (1.60euros) and frequent. The No. 1 bus stops right outside Merignac Aeroport every 10 minutes and takes a route through town until it reaches the train station Gare St Jean after about 40-50 minutes. This bus also intersects at the stop 'Victoire' with the tram line B that runs directly between the symposium venue 'Forum' and the city centre.

A direct navette bus also connects the airport to the city centre and train station and departs every 1h (single trip 8 euros; tickets can be purchased from the bus driver). The journey to the train station usually takes about 30 minutes but can take longer during rush hour.

You will also find a taxi rank outside the airport. Check with the driver how much the fare will be to your hotel or the venue as it can be expensive. Expect to pay between 35-45euros.

The high-speed train (TGV) now only takes ~2hrs to reach Bordeaux 'Gare Saint-Jean' from downtown Paris 'Gare Montparnasse' with trains departing roughly every 45-60 minutes. It is also possible to take a direct train to Bordeaux from the Roissy-Charles de Gaulle International airport in Paris in less than 3 hrs however, the service is less frequent. Tickets can be purchased in advance at the SNCF webpage.

Getting around Bordeaux and to the Venue

Information and tickets for the bus and tram routes can be obtained from the ticket office in the station or from outside the train station where tickets can also be bought from one of the ticket vending machines. The price for a ticket accessing all trams and buses during a 1 hour period will cost 1.60euros. A card can also be bought for 5 and 10 voyages. Note that to buy a ticket for 5 voyages you will probaby have to go to the ticket office as the machine caters more for 10 voyages, single day passes or single trips. For more information on the different fares and locations to buy tickets can be found online here.

There is a bus line Number 10 direction Beausoleil that can be caught from Rue St Vincent de Paul just outside the train station. This bus is a 20 minute ride to Talence and the nearest bus stop to the venue is called the Mairie de Talence. From here it is a 8 minute walk to the Forum tram stop through the Parc du Chateau Peixotto.

Tram ligne C destined for 'Bordeaux Parc Expos-Stade Matmut Atlantique / Cracovie / Gare de Blanquefort' will pass through the city centre stops of 'Place de la Bourse' and 'Quinconces'. The tram line C also intersects with the tram line B at 'Quinconces' that takes you to the 'Forum' tram stop near the symposium venue.

The symposium will be held at L'Agora du Haut-Carre located in Talence.

Information on public transportation solutions and timetables can be found at the Transports Bordeaux Metropole web site.

For those participants booked into the Teneo hotel they are conveniently located near the forum tram stop. 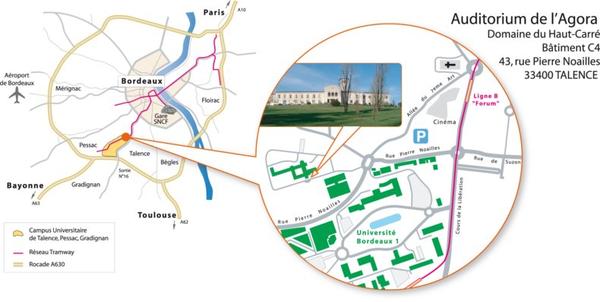